Welcome to the Kid Lit Giveaway Hop Holiday Extravaganza, thanks to Mother Daughter Book Reviews and Youth Literature Reviews.  We are talking about the short story ebook of Dylan’s Yuletide Journey.

It’s a Giveaway with a difference because EVERYBODY gets a copy of Dylan’s Yuletide Journey! 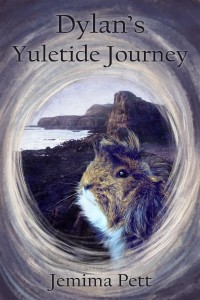 On the north west tip of the Isle of Mull, Castle Haunn faces a bleak Yuletide. Their strawberry juice has run out and they have lost the extra delivery to keep their power cells going.  The supply ship was lost in a storm.  No fresh food, no presents, and even worse, no heat.  It’s going to be a cold, hungry holiday.

Young Dylan is despatched to take a message to the mainland calling for help.  His twin brother Dougall tries to find a solution to their problem, using raspberry juice and any sources of different metals he can find.  The Laird’s wife hasn’t missed her silver necklace… yet!

On the way back from his errand, Dylan falls into a trap.  He discovers the cause of the missing strawberry juice, and more trouble than he ever imagined!

Will the loveable twins survive their troubles? Will it be a sad and lonely Yuletide?

Dylan’s Yuletide Journey is a short chapter ebook (7 chapters, 7,000 words) for Middle Grade readers aged 8 and upwards.  As usual with Jemima’s books, each chapter has a black and white illustration. It is available to all FREE ON SMASHWORDS for the winter season only.

Download your copy here – and check the end for the special Christmas code that you need to enter the giveaway!

Dylan and Dougall were born on November 27th 2011 and came to live with me just three weeks later.  Right from the start Dylan was the cheeky, alert one, into everything, and Dougall was sweet, shy, and thoughtful.  I was already well into the Princelings of the East series, and I didn’t really want to write them into it in a false way.    For some reason I thought of them as the Princelings of the North, and set them in a castle in a lovely place that I like to go for my vacation, a wild place where the noise comes from seabirds, corncrakes, deer and ravens.  And cuckoos.  Imagine a place where two cuckoo clocks chime all day and night, and that’s Haunn in May!  Haunn is part of Treshnish Farm, and you can see their blog online.

I took Fred, George, Victor and Hugo up there on holiday a couple of times.  It’s a long journey from where we live, taking two days.  Once I had more than four guinea pigs, holidays with them became impractical.  I’m hoping to return one day, when we’re back down to four.  I hope Dylan and Dougall will get to go there.

Dylan loves running around, so in making him the messenger, I can just imagine him running over the moors in his own inimitable style.  He is such a hairy guinea pig that it’s rather like watching a mop run around! He’s adventurous and brave, so I expect there will be more stories about him and Dougall.  I like the idea of doing a series of short stories and combining them into one volume, so keep watching for that.

This is a Blog Hop

Go and hop around the other participants in this extravaganza!


and now… the Holiday Extravanganza Giveaway!

One lucky winner will win a paperback of The Princelings of the East – the Trilogy (or ebooks, depending on location), another will win an ebook of their choice, and four people will win signed prints of chapter illustrations.