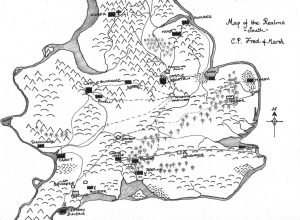 The first map of the Realms, drawn by the then Crown Prince Fred of Castle Marsh, came out in 2012.  It showed the southern part of the territory used by the Princelings series, in an olden style, with tracks, tunnels, most of the castles and an indication of the terrain.

If you look closely you’ll see that the Crown Prince forgot to erase his pencil workings underneath the ink drawing.  If you’re a student of the books, you may also notice a couple of things that might be incorrect (I wouldn’t dare criticise Fred’s accuracy), and places mentioned in more recent books that don’t appear on the map at all.

Fred and I discussed this last week.

“Well, yes,” he said. “It’s as good as I could make it at the time, but we’re talking five years ago, remember.  George had only just got us flying then. And anyway, I seemed to be the only person interested in it.”

But only the southern part?

“It takes a long time to cover the distances further north, and the weather gets in the way.  My fingers were freezing by the time we got there, and it was difficult to hold the pencil, let alone measure bearings and so on.  The pilot called them back to me sometimes. And anyway, I had to give up.”

That raises two questions, I say. Who were the pilots, assuming that ‘the pilot’ means someone other than George, and why did you have to give up? 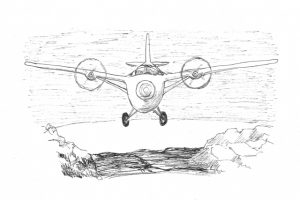 Fred gives me one of his famous Looks.  “I had a castle to run, didn’t I?  I longed to have enough time to go off for a flight and see the world down below.  It feels great flying about like a bird.  I just had to make the most of the times I needed the air taxi service, as we called it.  So I’d have whoever was on duty as pilot.  In the early days it was often Pippin, and when George wasn’t actually designing and testing planes he’d take me out of course.  But those times got fewer and fewer.  They ended up training up some of the youngsters at Castle Marsh to do the mapping work, and piloting too, so they worked in pairs.  I think one flew for an hour while the other mapped, then they swapped.  Even Kira had a turn before family duties meant she couldn’t risk going and having an accident.”

“Oh, well, yes.  We did have some accidents. One pilot was killed, although I heard some other people had bad accidents due to incorrect maintenance.  George or Pippin investigated throughly.  Most of ours were due to tiredness when flying in bad weather.  George put a lot more safety features in the later models of his flying machines.”  He looks thoughtful.  “Flying is pretty safe, you know.  Accidents happen with coaches as well.  It’s just, well, you don’t have so far to fall from a coach.”

It’s a typical understatement, I suppose.  What of the map of the North, then.

“Oh, well, it’s more or less ready.  A bit untidy, but probably as accurate as we’re going to get it.”

How ready is ‘ready’?

“Well, if you can get it sorted into that thing you use to tell people our stories, I suppose it could be ready by the end of the month.  Then you could get it out in October, couldn’t you?”

It’s the way he says these things that you feel you will do exactly as he says.  Of course I could.  I have nothing else to do. Apart from all the other things on my list.

But yes, with any luck, watch out for the map of the Realms, North, in October some time.

Have you seen the map of the Realms?

3 thoughts on “Have you seen the map of the Realms?”