The Princelings of the North 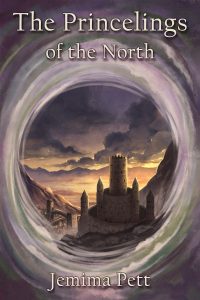 Book 8 of the Princelings of the East series

Irrepressible Dylan and steady Dougall are inseparable denizens of the tiny castle of Haunn, so far away from the rest of civilisation that it’s almost off the map. And maps are one of the key elements of this intricate adventure. Dylan finds a treasure map inside a bottle washed up on the shore – and he reckons he knows where X is. Instead of treasure, he finds the exiled Prince Kevin of Castle Deeping, antagonist in the Talent Seekers, bit-player in Bravo Victor, and mystery prince in Willoughby the Narrator. Kevin has had time to realise what a fool he’s been, and now wants vengeance and his castle back, which is just the sort of adventurous challenge that Dylan craves.

Lovers of the series will devour this latest adventure, but newcomers may find it best to start with the box set of books 1-3 or book 5; book 7 links to Kevin’s disappearance. This is a mystery adventure in a world not quite like ours, suitable for age 10 and upwards. The series is set to conclude with book 10.

Dougall looked at the scrap of paper his brother Dylan had smoothed out on their bed.

Dylan sighed, and pointed out the lines. “There’s the outline of the island, and the rocky inlet where the boats go in, and the wiggly lines are where the creek goes into the marshes. And there’s an X for where the treasure is buried!” he finished, leaping off the bed. “Oh, why can’t we go now? It might rain tomorrow!”

“But where did you get it?” Dougall was not one to act without all the facts.

“It got washed into the tide pool down near the Ensay Burn. I fished it out. It was in a bottle. I saw it glinting green and bobbing about.  I thought it had a stick inside it, but it broke when I dropped it on the way back and I found the paper!”

“But why do you think it’s a treasure map?” Dougall had not yet caught his brother’s enthusiasm.

“It could mean anything, X.”

Dougall thought for a bit. He wasn’t familiar with maps, except of the night sky, since he was one of the star-watching team at the castle.  He didn’t go out of the castle much, except onto the crags above to check the solar cells or the turbine flow. It was Dylan who went all over the island, running messages. He’d been most places. 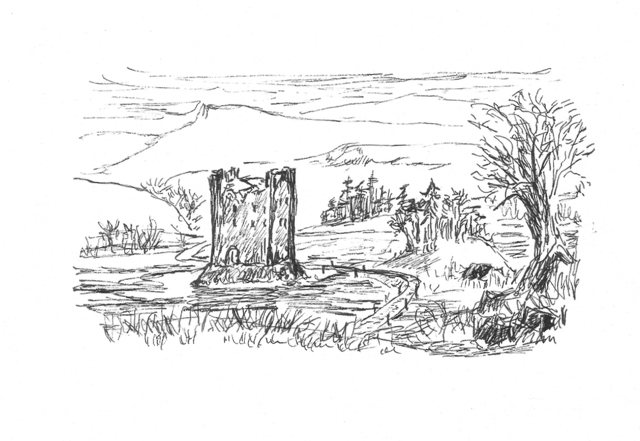 “Have you been to this place?” he asked Dylan, wondering whether he really did know what he was talking about after all.

“Umm, not exactly.  It’s pretty much on the way to Tober Hold, but I usually go a bit further up the glen, and keep to the high ground.  This bit’s all wet.” He pointed to the network of lines he’d described as the creek.

“And there’s nothing there that could be marked as a cross?”

Dylan thought for a bit.  Then he looked at the map again and then at his feet. “There’s ruin on a rock. By the crossroads,” he mumbled.

Dougall looked closer at the map. “Well, nobody’s marked the roads going into and out of the cross. You might still be right. Is it the right place for the crossroads?”

It was Dylan’s turn to study the map closely. “Yes,” he concluded. He stared at it for a moment. “Why would anyone…”

“Mark a cross on a map and not the roads leading up to it?” finished Dougall, his eyes sparkling.  “How long will it take us to get there?”

The little island of Ulva is just to the south of the area where Jemima has placed Castle Haunn, Dylan and Dougall’s home on the Isle of Mull.  The community of North West Mull have the opportunity to buy the island from the current landowner, and use it as a sustainable resource, securing their own futures. Jemima invites everyone to join in her part of the fundraising effort on her JustGiving page, where you can get more details.  Anyone donating on her page will get a copy of a new novella written especially for the appeal, Dylan and the Lights of Ulva, with Jemima’s thanks.

Please help to promote this massive appeal for the small number (in the tens rather than the hundreds) of islanders.

Now for the Giveaway!

I’m giving away prizes include copies of the new paperback and the ebook of the Box Set internationally, with an extra prize for a UK winner. There will be four prizes in all. The raffle opens on 28th January and runs until 14th February.

The Princelings of the North is OUT

Tagged on: book launch    giveaway    The Princelings of the North    ulva buyout