The second chapter of the Princelings of the North pretty much brings anyone who’s missed anything up to speed on what happened to Prince Kevin after Willoughby fell from the tower in book 5.  Fortunately for him, Dylan jumped to the right conclusions after finding a message in a bottle, the story of which has been out several times on Jemima’s blog as ‘X Marks the Spot’.

Dylan has persuaded Dougall to take a day trip from their own Castle to see if the map really does mean anything, since it appeared to mark a ruined castle. 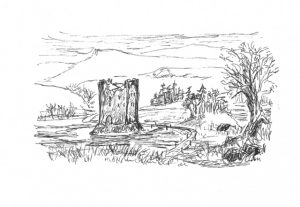 Chapter 2: A Prince without a Castle

In which Dylan and Dougall meet a forlorn hopeful

It was low tide, although Dylan reckoned they’d only have an hour or so before it turned. We’ll need to leave before then, anyway, if we want to get home before dark. He’d never explored this castle before, because it was in such a wet place. The road flooded at high tide and was squidgy at other times. Unlike the bogs he was adept at crossing, all the land between the creeks seemed permanently wet.

He and Dougall stood in front of the castle gates, wondering who had barred them and whether there was anything inside they shouldn’t let out.

“Hello!” Dylan called after a few minutes. “Is there anybody there? Anybody inside?”

He waited. He looked at Dougall, who shrugged. “Try again.”

“Helloo-oo! My name’s Dylan. I found your map.”

“Do you think that’s a good idea?” Dougall whispered.

It was Dylan’s turn to shrug. “Why not? There’s nobody here, anyway. Should we try opening the door?”

“Hello,” said a faint voice from somewhere above them, inside the castle.

“There.” Dougall pointed to the second-floor window. A white nose appeared, accompanied by what looked like gold or ginger hair, although in the shadows it was hard to tell.

“Do you want to let us in?” Dylan called.

The nose disappeared. After a long while, they heard scuffles and mumbles behind the door. The funny window at the side turned a little.

“We can speak through here,” the person inside said. “It’s used for passing things into and out of the castle safely. I tried getting through it myself, but I nearly got stuck.”

“No. There’s no lock. It’s blocked somehow. I can’t get the gate to budge.”

“Well, it’s got a great timber beam across it on this side, that’s why. Hang on. Dougall, you get that side and when I say ‘heave’ you push upwards on it.” Dougall nodded and got into position while Dylan grabbed hold of the other end and put his shoulder underneath it. “One, two, three—heave.”

The beam shot into the air, bounced on the causeway, and fell into the creek.

“Do you think we should pull it out?” Dougall looked at the beam, which was sticking out of the mud.

“No, just open the gate. Here we go.” Dylan pushed the gate, and it opened into the castle. “Hello.”

“Oh, my goodness, you’ve done it. I thought I was going to die. How did you find me?” The stranger sat on the floor, looking at the open door in wonder.

“I found your map. In the bottle. Very clever of you. When did you send it?”

“My map? Oh, yes. My last hope. I must have thrown it out… about the time the geese left.”

“Yes, probably. I’m sorry. Have you anything to eat? I’m starving. That was when my food ran out. The villagers or whoever it was stopped giving me any.”

“You haven’t had anything to eat for a month?” Dougall couldn’t believe that anyone could live that long without food. “Have a biscuit.”

“And would you like some blackberry juice?” Dylan asked. He and his brother sat down in the archway with the prisoner and laid out their picnic, what they hadn’t eaten on the way. The stranger ate two biscuits and an apple, gobbling the first biscuit and then savouring the rest.

“And why are you here?” Dylan asked.

“My uncle left me here. Said we were going to have a holiday and then left me here, locked in.”

“Yeah, I’ve got an uncle who’d like to do that to me.” Dylan sounded bitter.

Kevin drank from the bottle of blackberry juice. “You don’t know how wonderful this tastes.”

“So when did he leave you here?”

“In the spring. Said we were having a spring and summer holiday. Flew me here in a flying machine. Landed over there. Came down to look at the castle, locked me in, said the villagers would bring food, and left me. Never saw him again. Oh, I saw him fly off.”

“What have you been doing since then?”

“Thinking about my life and how stupid I’ve been, mainly. In between trying to find a way out, wondering if I could swim for it, drawing a map or three, one of which you found. Oh, I’m very glad you found it, and thank you for rescuing me,” he added.

“You’re welcome,” said Dylan automatically. “But why would he just abandon you miles from anywhere?”

“Yes, where am I exactly? He just said we were going up north. It was a long way, it took forever, but I fell asleep so I don’t know exactly how long.”

“You’re on Moreisle, off the coast of the Argyle. The nearest mainland settlement is Kerrera. They’ve got vacuum post there, so maybe you’ve heard of it.”

“Can we get there, so I can send a message?”

“Yes, I can take you there. Who will you send a message to?”

Kevin fell silent. “I don’t know,” he said, after a while. “I had a plan once. I had lots of plans. I gave up hope of ever getting out. I’ll need to think of it again. But I must get back. Colman got rid of me because I asked when he was going to hand my castle over to me.”

“My uncle. He’s been regent since I inherited the title, because I was too young to take over. Then he just kept being regent even though I was old enough. I didn’t realise. I was really stupid.” Kevin’s bitterness was showing. He’d had months to work it out, to relive his life and regret lots of it.

“So if you go back, you’ll have to get rid of him before you get your castle back.” Dougall had a wonderful way of stating problems matter-of-factly.

“Well, talking of getting back,” Dylan said, getting to his feet, “if we don’t start back pretty soon we’ll be out after dark, and that’s not allowed without special permission.”

Dylan saw the fear in Kevin’s eyes and tried to imagine what it was like to be left in a strange castle with hardly anything for months. “At least the gate’s open now. You can come and go. Get some grass, and blackberries, and nuts if you can find them. There’s rosehips on that hedge—look, I can see them from here.”

“Will you come back?” Kevin whispered.

“Yes.” Dougall surprised Dylan with his decisiveness. “We’ll come back tomorrow, or the next day, if it’s raining. On the first fine day, anyway. You think of what you want to do next and we can talk about it and make a plan. How does that sound?”

Kevin smiled. This was the first time they’d seen him look anything but cowed and afraid.

“So if you’re Prince Kevin,” Dougall continued, “what is your castle’s name?”

“Prince Kevin of Deeping, right.” Dougall obviously wanted to check when he got back.

“Of course I should really be King Kevin. I’m at least Crown Prince Kevin.”

“I’m Princeling Dougall, and this is my brother, Princeling Dylan. Did we tell you that?”

“Dylan of Castle Haunn.” He stuck out his hand, which Kevin grasped enthusiastically. “It’s down the coast, that way, but you need to go overland or by boat. You can’t get round on the shore. But we really do need to be getting back. The light will go soon—it gets dark early in winter. And there’s more rain on its way.” He nodded towards the west; dark clouds were rolling in. “We’ll be back—don’t go anywhere without us.”

“Dylan knows where to go. It’s a good thing you found us, or we found you,” added Dougall, shaking Kevin’s hand. “We’re resourceful.”

Dylan smiled. Being called resourceful was both a compliment and a complaint from Lady Carolyn.

“We’ll be back on the next bright day,” he said. “Keep the rest of the food. We’ll bring more next time.”

Kevin’s ears drooped as the two princelings turned around and walked across the causeway. The tide was already nearly level with the rough stones. They stopped at the track to look back at him, and waved. The pale figure in the gateway waved back, looking like the loneliest soul in the universe.