I know I keep saying that I’m writing books 9 and 10.  I really am.  It’s just that I haven’t actually typed any words for a few months.

I do keep picking up more ideas because, around the ultimate issue of George building a flying machine that will take Vex to Hattan and bring back Wozna Cola (come on, that was the end of book 1, keep up, won’t you?), there is the whole reason for that not being straightforward.  Revolution! 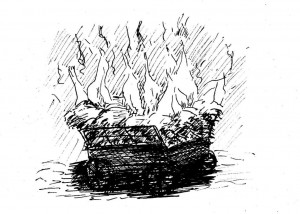 When I originally thought of this, all was reasonably sane in our world.  Mr Obama was running the USA in a fair and reasonable manner that gave the rest of the world hope that he wouldn’t destroy it.  The world, that is.  The UK was being run by a coalition that, even though it was mad, self-serving and overturning everything we’d done to make the country a fairer and more democratic place, turned into a single-party, self-servative con-trick.

And with all the turmoil that had been going on for the past two and a half years, frankly, anything I could write would be tame by comparison.

I’ve finally got to the stage where I can understand where I’m coming from in the Princelings world again.  I read a great book involving rebellion (Rebel in the Sands) which I’m reviewing early in February on my blog. It gave me great food for thought over exactly who and how my rebellion might unfold.

In a chat to my brother he moaned yet again about our current trouble being the UK does not have written constitution, so people make up ‘rules’ to suit themselves.  He also reminded me that one of the Spanish regions had elected women to all its key posts, which resulted in the leader saying, ‘this is bad, we should have a man in at least one of them’ and finding the rule which said that was a right and proper way to go about things.

My first thought was – I knew the women of the Lost City of Arbor had a role in this I hadn’t developed yet!

So, with the second book of my science fiction series finally out, I can get back to writing the last two Princelings books.  They are both works in progress 🙂

The newsletter will be an occasional message to you, giving you some snippets I haven’t otherwise let slip.  Advance information; special offers to subscribers only, that sort of thing.  Why not add yourself to the mailing list today?

I know I keep saying it but…

2 thoughts on “I know I keep saying it but…”