Here are links to short stories and interviews that have appeared either on the blog or this website. I’ve now excluded all those that appear in the books themselves. Many were incorporated into Chronicles of Marsh. You may find some of them if you search on ‘short stories’ either here or on Jemima’s blog.

Most of these links go to the original story, which may be on Jemima Pett, Author, and not this website.

You can also find teasers or excerpts from the books in a section in the menu under Xtra Stuff.

Dylan and Dougall – and Deirdre

Two Dylan and Dougall stories appear on this website starting in December 2012. They were included in the BookElves Anthologies, but their novella versions are no longer available as separate ebooks.

I’ve revised these stories to involve a new friend Deirdre, and created an omnibus edition of their adventures prior to Princelings of the North. Deirdre takes the lead in a fourth story, written for the collection, and has a rather larger part in the fund-raising story The Lights of Ulva, again, rewritten for the omnibus edition.

The ebook is available at Amazon, Apple iBooks, Kobo and B&N for Nook, as well as Smashwords, and the paperback with monochrome illustrations can be sourced from those sites too. A better quality paperback version with some of the illustrations in colour, can be ordered direct from Jemima’s website. 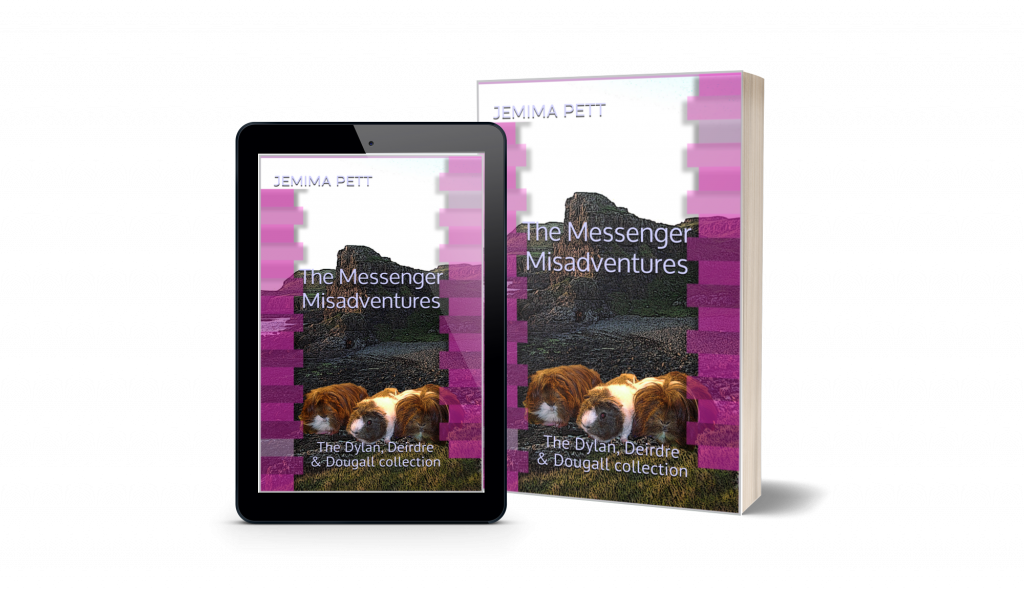 Characters, events and their backstories

Rajah of Nilgiri. This is a 1200 word backstory explaining how Mariusz came to meet the Rajah, aka Blackbird, who he mentions from time to time.  He was implicated in some goings on at Arbor in Traveler in Black and White.  That implies that Mariusz met Rajah some time in the mid-late 1990s, and suggests that Mariusz may not have been top pig at Castle Hattan then, but he was already a big shot in the cola business (unless the Co-Runner venture was his first big business test).  Having given the Rajah the alias of Blackbird in Traveler, I was delighted to discover that in India there is a Nilgiri blackbird that has similar colouring to the guinea pig called Blackbird on whom the Rajah is based.  Hence the use of the Nilgiri Hills as Rajah’s Rajdom.

Uplifting Experience.  Professor Saku is encouraged to copy the new strawberry power plant and install it at Hattan, but makes an interesting and useful discovery in the process!

Glory of Calella.  This is the back story for Glory – one of Humphrey’s team in The Talent Seekers. Nothing like doing back story before the main story comes out! Suitable for 10 and up, although it includes implied abuse.

Humphrey Goes East. This is set in the future and was originally written for what I envisaged would be the last in the series.  Then I felt I had to write the others first to make sure I had all the developments right.  Humphrey is going west when he leaves Arbor at the start of Lost City – a journey which is continued in the Talent Seekers.  This story takes place some years later, and was summarised in Chronicles of Marsh.

No Room at the Inn of the Seventh Happiness. This first appeared for Christmas 2015, and I’ve rolled it out for a re-run at least twice.  One of my personal favourites, a story by Willoughby, and a hard-working Victor with his feet on the ground, putting customer service first as usual! I believe it’s referred to, but not told, in the books, so if it is told, please remind me!

A Pirate Yule. A two-part Christmas story in 2016, developing the life of the pirates after they kidnapped Fred in Fred’s Yuletide escape.  Part of this appears in Chronicles of Marsh. I had to chop it about to get the point of view right. The original is from the pirates’ point of view.

The Thief of the Moon.  An 1800 word story on Jemima’s blog in June 2017.  Features King Fred explaining eclipses to his daughter Jasmine, and Willoughby doing a story.  Never made it into the books, as the timing was all wrong (except the eclipse date).

The Passing of Lord Mariusz. This tribute to Mariusz of Hattan was written as a eulogy when he died. It took me ages to find it when I wanted to add it to the paperback edition of Princelings Revolution, because it is only on the guinea pigs’ blog, George’s Guinea Pig World.

The Professor and the Portrait Cat. A little fantasy I wrote to a set title for the passing of Saku, Mariusz’s mad professor.

As someone predicted, I’ve continued to turn in short stories featuring the Princelings characters. Most are in #writephoto stories and are listed in publication order.

Jemima’s blog occasionally features interviews with various characters. There are several with Fred and George. The one with Ludo is particularly interesting, and the reason why he had to come back, really.

Click here to go to the full list (in reverse order), which may include some with characters from other books (and repeats). It may be worth starting at the bottom of the second page.